Reading Tarot Cards: Why You Need a Handy Online Guide 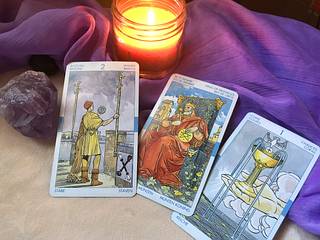 Tarot cards are an amazing way to get clarity and guidance, especially if you are looking for answers or struggling with making a major decision in your life. Using a tarot card deck can help you see situations more clearly, decide on a certain action, or even just give you peace of mind and acceptance. However, reading tarot cards can be a struggle for beginners because of the number of cards available, especially if the whole deck is going to be used. Fortunately, you can use an online tarot reading guide to help you understand the meaning of each card so you won’t need to memorize them.

The complete tarot card deck is composed of 78 different cards, which can be quite daunting for people who are not used to reading the tarot. These 78 cards are split into two groups: the Major Arcana and the Minor Arcana. "Arcana" is Latin for "secrets, so the name of these two groups literally translates to "Major Secrets" and "Minor Secrets".

While there are thousands of deck styles and themes out there, the most popular still remains to be the Waite-Rider deck. This deck was created by William Rider and Arthur Waite in 1910.

The Major Arcana is composed of 21 different cards, with an additional card called The Fool, which rounds the number out to 22.

The Major Arcana is used to make major decisions as well as tackle deep issues that a person might be struggling with, such as problems with family, love, or work. If you are wondering what career path you should take, or whether you should make a major life change, you should consult with the Major Arcana.

The Minor Arcana cards, on the other hand, are composed of 56 cards with four different suits, namely Cups, Swords, Wands, and Pentacles. Each suit is further divided into 14 different cards, with King, Queen, Knight, and Page cards, as well as cards numbered from one to ten. Each suit has a meaning:

There are many different spreads out there and it will take you some time to learn them all. However, one of the easiest and most popular spreads for beginners is the three-card tarot spread. This spread can be used with the full deck, so you might still want to use an online guide to help you read and understand the meaning of the cards.

Each deck represents a different point in time: past, present, and the future. The cards are read from left to right, and each card will have a meaning depending on their position and the image on the card.

While most people still have that notion of going to a psychic reading in person to have their tarot cards read by a professional, you can actually do it on your own! There are two things that you need to do in order to have a meaningful tarot card reading by yourself.

First, you need to choose the right deck for you. You can either purchase the deck, or have someone gift it to you. Gifted sets already have meaning behind them: the person who gave them to you sensed that a particular deck is right for you. However, you can still find a meaningful deck even if you purchase it for yourself.

Second, you need to find a website that is known for having good information about the tarot. In general, tarot cards will have a universal meaning, so even if the websites have slightly different wording, the message of each card should remain the same. You can look around to see whether the website you have chosen gives you information that is similar to other established tarot card guides online.

Horoscope
Free horoscopes for all signs. Find out what the stars tell about you ahead of time.

Palm Reading
The best and quickest palm reading guide available to learn how to read your palms.