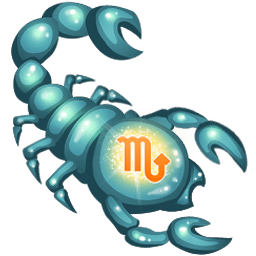 You approach life with an emotional intensity that few other signs can touch, Scorpio. As a fixed water sign, you aren't as open to change as mutable and cardinal signs, but that same determination and dedication to the things you believe in is part of what makes you the intriguing enigma that people want to figure out.

To explain some of your behavior, we can look to Mars, your powerful co-ruler, which starts the year in fiery Sagittarius. This electric combo finds you more willing to come out of your shell and go on adventures you might not consider at other times of the year. The planet's time in Aries, the other sign it rules, from the end of May to the start of July finds you more spontaneous and willing to take the initiative. Mars doesn't visit your sign this year, but its retrograde period (while in smart Gemini) from the end of October through the end of the year gives you time to reflect on past actions and the ability to grow from your mistakes.

Pluto, your other co-ruler, is in driven Capricorn all year and goes retrograde for about five months starting in late April, bringing some more amazing possibilities for transformation. With Pluto retrograde, you have the chance to go deep within your subconscious and uncover some very personal mysteries. If you want to know yourself better, Scorpio, this is the time to do it.

As always, the sun spends time in your sign from late October to late November, shining a light on your best talents and personality traits. Others are extremely drawn to you now because you emit an alluring magnetism that's impossible to ignore. You're still as secretive as ever, though, and you only let the people who have proven themselves to you over and over celebrate your birthday with you!

As an intensely emotional water sign, Scorpio, you don't play around when it comes to love. When you're with someone, you want to be with them in every sense of the word, and when you're in love with someone (whether or not it's mutual), your feelings sometimes border on what others might consider obsessive. What (and who) will capture your attention in 2022? Keep reading to unlock the mysteries of your love life!

As a strong-willed, independent sign, you certainly don't mind being single. In fact, under the right circumstances, you prefer it to being in a relationship and can thrive flying solo. As an introvert, you have no problem being alone, so you rarely enter into a relationship just to fill that void. This year could be the year you find that special someone, but you still might not want to commit yourself fully until you're 100 percent positive that your life with someone can match the (pretty good) life you already have on your own.

Poetic asteroid Sappho partners with fire sign Aries from the middle of January to early March, making you react without thinking a lot of the time and reject romantic notions and ideas in favor of more physical acts. Because you're reacting to base desires a lot more than logical thoughts during this time frame, Scorpio, it can really change up your dating style.

You'll have your share of challenges in your career this year, but your sheer willpower and determination can carry you though some very difficult times. Get the success you deserve with the following planetary guidance!

Hardworking Saturn often sets the pace for your work life, and its placement in clever, free-thinking air sign Aquarius is an interesting one for you this year. You do excellent work when you connect with others now, Scorpio, so even though you tend to work very well on your own (or at least in the absence of an authority figure who insists on micromanaging everything), this partnership opens you up to new networking and team-related possibilities.

There are potential shake-ups from the pairing of unpredictable Uranus in Taurus this year as well, but as a patient sign, you don't mind taking things slowly and looking at the big picture. This transit will help you think outside the box in some work-related areas, but you still aren't likely to make any major moves too quickly. If you branch out, you'll probably do it slowly and cautiously.

Strong Mars is partnered with disciplined Capricorn from the end of January to the start of March, which works well with your determined nature. What career-related goals do you want to accomplish this year?