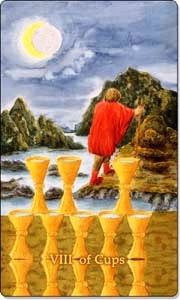 The Eight of Cups shows a man's back as he is walking away, on a journey somewhere. The setting of the card is night, which is different to most cards. The cups are stacked up behind the man, something which he is leaving behind.

This card represents a need for making some drastic changes in some area of life, either on a personal, work or domestic front.

This card shows that change is necessary, even if there is upheaval and disquiet in the interim.

The Eight of Cups is telling you it may be time for you to move on. You may be feeling a sense of restlessness or maybe you are finding that things which once gave you joy and satisfaction no longer have meaning for you. It is therefore time to begin the search for a deeper meaning. This may be a time of both sadness and joy for you. The sadness of giving up something familiar and the joy of realising that there is a deeper, more meaningful path for you. Try as best you can to keep your eye on the future.