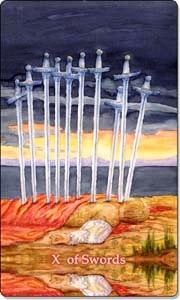 Ten of Swords shows a man who has been stabbed in the back by the ten swords. This card indicated the ending of something, whether it be a relationship, job or a project.

This card represents a sudden end to a situation, there is nowhere else to go, it is over. Any difficulties with the ending will only be temporary, so take heart in that.

This card suggests that you may be facing tough but important lessons at this time. You may be allowing one sword after another to stab you in the back, each one making you more and more weak. Perhaps this is because you feel guilty about something and feel you deserve to be punished. You need to ask yourself, however, what the payoff is in allowing this continuous pain. You first need to accept that you are prolonging this tragedy, then laugh at yourself and enjoy the symbolism of ten swords stabbing you in the back. After all, wouldn't one be enough?!